CRASH!!!!    Your 8-channel liquid handling robot arm just raked across the deck and one of the z-axis rods looks bent.   No problem, just call the manufacturer and have them come fix it, after all, it is still under warranty...right?   Well, maybe...

Most instrument warranties cover parts and labor but, that usually comes with the expectation that the failure is due to normal wear and tear, not abuse or unintended usage.  Using the liquid handler failure above as an example, the 8-channel arm likely got damaged because it failed to move to a safe Z-travel height before moving in X or Y.    But, was that because the arm failed to execute that command or because the programmer failed to instruct the arm to do so?   While a failure such as this might not occur in assays that have been running successfully for some period of time, they are more common when the user is still developing the assay or debugging it.   This type of failure could also occur because an operator forgot to retract the arm after some assay interruption or error condition.

Many OEM's (Original Equipment Manufacturer) will work with you to get the instrument back online and some may even be tolerant of such failures to the point of covering the associated costs under their warranty..but, you will most likely find there is a limit to their understanding.   If an instrument fails under normal usage, OEM's should and will cover repair costs but if an instrument fails again, or frequently due to operator error the OEM could and should charge for parts and labor and travel, even though the unit is under warranty.  Although such a stance would be unpopular for end-users, it is really no different than what you might experience in other areas of your life.  If you use your SUV to haul a boat that exceeds the vehicles gross towing rate you will probably damage your transmission or rear axle.  Should you expect Ford or GM pay for that?   The honest answer is, no.

Whether you bought the instrument new and are under the original warranty, or if you have purchased an extended warranty, make sure you understand just what kinds of failures are covered.   Ask up front.   Even if you purchase refurbished instruments, there is a limit to they nature of the failures that are covered (BTW - you should always insist on a minimum of a 6 month warranty on refurbished equipment). New or used, a warranty is a quality statement by the provider.   Buying instruments "AS IS" or with a "Money Back Guarantee" should set off alarm bells that the low price option that looks so attractive today, could prove to be a costly investment in the future.   Caveat Emptor...

What options should you consider when the warranty expires?   That will be the subject of our next blog...

The Tip of The Day 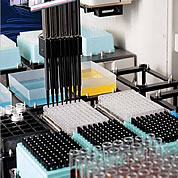 Back in May of 2013, we talked about the use of third party tips on liquid handling robots.   Well, we got a lot of emails on that one as it seems a lot of people are looking for alternative tip providers, for a number of reasons...but mostly cost savings.

We heard a lot of stories regarding OEM's who threatened to void instrument warranties or even refuse to service instruments that use third party tips.   Is that legal?  Probably not but, it certainly is unwise and I would imagine that is not a company policy so much as it is a regional sales rep or service engineer who does not want to lose a lucrative revenue stream.

Having worked on the supplier side (at Caliper Life Sciences, now part of Perkin Elmer),  I can tell you that most OEM's want end users to buy their tips...and only their tips.   Why is that?  Well, the biggest reason is that they have invested heavily in the creation of precision injection molds and the logistics required to stock and ship tips.  This is not inconsequential and often explains why OEM tips tend to cost more than third party tips.   Even when the mold costs have been amortized, stocking and distributing tips is a costly endeavor, as is ongoing quality monitoring.

So, you might be asking, how could a third party tip cause an instrument to fail?  The only conceivable scenarios I can think of are:

Other than that, it's really a red-herring argument.   Our sister division,  AssayGuru has performed performance analysis on a number of third party tips for various manufacturers and compared both pipetting accuracy and mechanical reliability.  These tests were conducted on various brands of liquid handling robots using both third party and OEM tips.   In most cases, there have been no issues and the third party manufacturers we have worked with were eager to find and correct any flaws, prior to launching their tip products.

In my next post, I will detail one such manufacturer who has impressed us so much that we have actually created a new partnership...stay tuned.